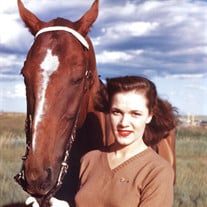 Laura MacLean, born Laura Lu Lowe in Cardston, Alberta Our mother passed away peacefully on August 6, 2019, at the Bridgepoint Active Healthcare Hospital palliative care unit in Toronto. Laura was the widow of Donald Charles MacLean. She leave one sister, Irene Frayn, only surviving sibling of the children of Pearl Stott Lowe and Solomon Samuel Lowe. She also leaves her eldest son Ken (and his two children Siobhan and Duncan) and her youngest son Don and his wife Marie-Andrée Ostiguy. Laura was born January 22, 1927, in Cardston (Alberta). As a child, she lived a happy childhood in and around the fields and rivers of the beautiful ranchlands just east of Chief Mountain. As a child, she played with her 10 siblings at the foot of the Rocky Mountains, sipped water from Lee’s Creek, picked wild flowers and berries and baked goodies with her beloved mother Pearl Lowe. She was active in acrobatics and dance reviews and the various activities of the Mormon church. She attended Sunday school, Beehive Girls and the Young People’s Mutual Improvement Association. In her words, "we would get together around someone's piano and play duets and sing and eat popcorn and cookies and drink lemonade and play card games like Fish and Rook and other "Mormon" games. My! My! We were a rowdy bunch." In 1942, at the age of 14, she left home to live with her oldest sister Ruth in Calgary where she learned to groom and ride two very spirited thoroughbred show horses that Ruth owned, Big Mac (the racer) and Big Ben (the jumper). In Calgary, she finished her business course at Garrett Business College and met Don MacLean (nicknamed Mac) in 1948. In her words, "The friendship grew. Don came toting a long stemmed red rose and my favorite 'Mrs. Bridgeman's Chocolates' every Friday night when he picked me up from work. He was fun to be with. After we became acquainted, we started dating regularly and as time passed by our thoughts turned to more serious matters, like marriage and house building. How brave we were!" Laura married Don in Calgary, September 1, 1950 and by March 1955 bore Kenneth Duncan MacLean and then by November 1956 bore Donald Charles MacLean Jr.. She lived throughout Canada with her family, working in administrative and accounting positions, at times for her husband Don and also in many other fields of work. She moved with her family to Edmonton, Regina, Moncton, Calgary, Winnipeg, Calgary, Beloeil (Québec), and then finally, moving to Toronto in 1996. For many years, Laura tended to Don to help in all ways with the Parkinson’s that afflicted him since 1980. This tending stopped in December of 1999 when Don broke his hip and then passed away from a fatal pulmonary embolism. In 1986, Laura had her first heart attack and then another in 1995, followed by a triple bypass and then a pacemaker in November 2000. Laura passed away in Toronto, living out all but the last 13 days of her life in her comfortable condo. She so enjoyed her independence in her golden age and was determined to carry on to the end in her own home. In her reflections, Laura wrote "However, wherever we lived, the family always enjoyed exploring the area in a travel trailer on weekends and holidays. We all fished in ocean, lake and stream, whatever was available in the area of residence. We visited beautiful Canadian Parks all across Canada. And we owned five new homes of the many (14) we lived in. It was a good experience for the most part as the kids grew up -- hard as it was moving and changing schools so often. We are the children of the world, it would seem, hard pressed to call any one place 'home'... " Laura brought great knowledge and support to her family throughout her life. Following the passing of her husband Don, she became an expert on all sorts of matters pertaining to computers and digital media. She was of great assistance to Marie-Andrée and Don in their music business, participating in many ways, in particular on matters concerning the review and editing of written materials. In Laura’s latter years, Ontario health services and the medical community provided her great assistance to maintain her quality of life and independence. We are very thankful for the contributions, dedication and compassion of this health care community and the services that collaborated with Laura to keep her happy and well cared for. Laura passed away peacefully and notably, with a bright mind up to her last day, but a body impacted by the progressive wear and tear associated with congestive heart failure. A private family service is planned and multi-media memorials/tributes will be made available for viewing at: https://www.aftercare.org/obituaries/Laura-Maclean-2/#!/TributeWalliCloud Share Photo Album and at Facebook: https://www.facebook.com/don.maclean.549221 In lieu of flowers, donations can be made in the memory of Laura to: Heart and Stroke Foundation of Canada Bridgepoint Active Healthcare Hospital, Toronto Michael Garron Hospital - Toronto East Health Network

The family of Laura MacLean created this Life Tributes page to make it easy to share your memories.

Send flowers to the MacLean family.