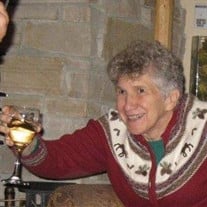 1940 - 2019 Linda Heidi (Leatherman) Holmes born April 5, 1940 in Oseola, Wisconsin of Wilbur and Myrtle Leatherman. She was diagnosed with a return of breast cancer in October 2017. She died peacefully at Kensington Hospice, Toronto on December 4, 2019. Heidi attended University of Chicago for her Bachelor of Nursing degree. She worked at WesleyMemorial Hospital and traveled to Brazil prior to working for USAID as a nurse advisor in Vietnam in 1968-1969. She continued her nursing career working in Emergency rooms, Critical Care Units, Long Term Care and Palliative care. She was Director of Nursing at Bestview Long Term Care. After nursing she worked for the Toronto Alzheimer’s Society, Toronto East CCAC and other jobs. Heidi was a member of the Ecumenical Institute in Chicago from 1970-1972, and continued to work with ICA in Canada, Hong Kong and India until 1990. She had a passion for local community development. She taught a number of training schools in India and mentored new trainers. She was also active in the research dynamic of ICA. She also took time off from working to care for many of her close family members during their final months and at times of serious illness. Heidi married Duncan Holmes on June 4, 1972 in Chicago. They lived in Montreal until moving to India for 6 months in 1973. Rachel was born July 28, 1973 in Hyderabad India. Heidi and Duncan separated on June 4, 1997. After her last retirement she focused on her passions of the outdoors, First Nation’s issues, dancing and painting. She is survived by her daughter Rachel, her sisters Sonja Van Dusseldorp and Jonna and Maynard Heins. She has nieces and nephews Tracy, Noel, Lane, Tanya, Tina, Rick and their families – many of whom have visited her in the last two years. A celebration of her life will be held on Monday December 16, 2019 at the Party Room of her condo from 6-9 pm. Rather than flowers please consider making a donation to one of the following: 1. Kensington Hospice in Toronto www.kensingtonhealth.org/hospice A beautiful small 10 bed hospice in downtown Toronto where Heidi spent her last 3 weeks. This is one of a very few small publicly funded facilities. Their staff and volunteers were very respectful and caring. 2. Doctors Without Bordershttps://donate.doctorswithoutborders.org Treats people where the need is greatest. They are an international medical humanitarian organisation. They help people threatened by violence, neglect, natural disasters, epidemics and health emergencies. 3. Indpirehttps://indspire.ca Indspire is a national Indigenous registered charity that invests in the education of First Nations, Inuit and Métis people for the long term benefit of these individuals, their families and communities, and Canada.

1940 - 2019 Linda Heidi (Leatherman) Holmes born April 5, 1940 in Oseola, Wisconsin of Wilbur and Myrtle Leatherman. She was diagnosed with a return of breast cancer in October 2017. She died peacefully at Kensington Hospice, Toronto on December... View Obituary & Service Information

The family of Linda Heidi Holmes created this Life Tributes page to make it easy to share your memories.

Send flowers to the Holmes family.