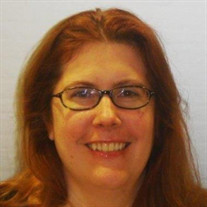 March 6, 1976 – March 14, 2022 Marie Margaret Armstrong died peacefully on Monday, March 14, 2022 in Toronto at the age of 46, in the presence of family. Beloved older sister of Elizabeth Orchard, Jessica Potter and James Armstrong. Cherished daughter of Lynley James and the late E. James Armstrong (2008). Treasured aunt to many nieces and nephews. Marie was in treatment for ovarian cancer for three years before succumbing to her illness. More important than how she died, however, was how she lived. Marie strongly valued education, people, and new experiences. The positive impact she had on those she crossed paths with was shown by the many extended family members and friends who rallied around her after her diagnosis to make sure that she never had to walk her journey with cancer alone. Marie graduated from McMaster University in 1999 with a Bachelor of Engineering and Management (Chemical Engineering) and was employed by ABB Automation, where she was a proposal coordinator who worked on many significant electricity projects. Marie was a proud resident of Hamilton, Ontario for over 25 years. While working at ABB, Marie took courses for pleasure in psychology and eventually pursued her PHD in that field. Travel and experiencing new cultures was a passion for Marie, and she spent time in more than fifty countries throughout her life. She was also passionate about volunteering, particularly at sporting and cultural events, including her work with the Toronto International Film Festival, Hot Docs Film Festival, Rogers Cup, Skate Canada, the 2014 Olympics in Sochi, the 2015 PanAm Games and the 2018 Olympics in PyeongChang. Marie was an exceptionally intelligent and quick-witted person who lived a life filled with love and laughter. She believed in the importance of kindness, and consistently chose to approach every situation with humour and grace. Marie asked for the following message to be relayed after her death: “I leave with no regrets, love for all, and the belief that God is good. Thank you for being even a small part of my journey and I wish you all the best for a happy life.” In lieu of flowers, Marie has requested donations be made to Plan Canada (https://plancanada.ca/). As per her wishes, no memorial service is planned, but her family invites everyone to share any photos, memories and stories of her.

The family of Marie Margaret Armstrong created this Life Tributes page to make it easy to share your memories.

Send flowers to the Armstrong family.