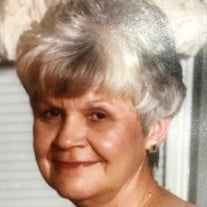 Marion Isobel Godawa (nee Lewis) August 21/1945 - September 9/2021 It is with great sadness that the family of Marion Godawa (nee Lewis) announce her passing at Lakeridge Health Oshawa Hospital on Thursday September 9/2021. Marion was in her 76th year. The loving wife and best friend of Stan Godawa. Proud mother to Sheri Craggs and devoted grandmother to Carter Craggs. Marion will be missed by Helen and Joe Godawa, Helen Baxter (Godawa), Julie Krupop (Godawa), son-in-law Shawn Craggs and nieces, nephews, relatives and friends. As an only child, Marion was born in Toronto, Ontario. Growing up in downtown Toronto, Marion’s home in the Annex would be noticed for its architecture style and features. In later years, that same house would be recognized as a piece of Ontario’s history and would be given the distinction of a Heritage home. Growing up Marion was always intrigued by the legal field. As a graduate of George Brown College, Marion would utilize her Legal Studies diploma and attain a position as a legal secretary for a Toronto downtown law firm. Marion would meet her true love in an elevator in the building she worked in. Later to be her husband of 54 years, Stan Godawa, a Chartered Accountant and graduate from Queen’s University, Kingston, Ontario, working for Ernst and Young, would strike up a conversation with Marion. Stan would make Marion laugh and show off her beautiful smile. Marion and Stan would enter their life-long commitment to each other on October 21/1967. Their sacred vows were witnessed at Holy Cross Church, Oshawa, Ontario. On their honeymoon, Marion and Stan observed the 1967 Olympics in Montreal, Quebec. Marion will be remembered for her support as a secretary in her husband’s accounting practice in Oshawa, Ontario. Marion was a proud mother. Despite her health setbacks, she was always supportive of her daughter’s decisions. She was a very proud grandmother. Anyone she spoke to, Marion would always share how intelligent her grandson was. Time and time again, Marion would explain to her grandson the importance of education, even though she had no uncertainty that he would be successful in life and make her proud. Marion will be remembered for her many hobbies. From knitting slippers and scarves to displaying her needle point runners or dollies throughout her house but making her homemade blueberry cheesecake brought her the most enjoyment. Marion loved shopping in downtown Oshawa. It was a regular practice for her to purchase a new blouse at Sally Shops and come home with banana cake from Woolworths. She loved cats. No cat was ever lonely in her home because there was always more than one. Later in life, Marion would be remembered for her passion in collecting knic knacks that would once again display her love for cats. Marion will be remembered by her family and friends as a woman who was outspoken, determined and having the ability to remember every last detail. When she noticed that something appeared not right, she did not hesitate nor was afraid to speak up. Marion did not want a funeral where tears would be shed. Instead, she wanted her family and friends to remember her by sharing in laughter and reflecting on memories. A celebration of life will be held at a later date. In her honor and in these uncertain times, Marion wanted people to be mindful to treat each other with kindness and love.

The family of Marion Isobel Godawa created this Life Tributes page to make it easy to share your memories.

Send flowers to the Godawa family.