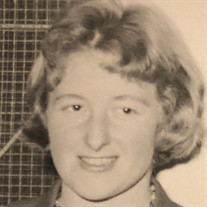 Marjorie passed away peacefully in Toronto at the age of 81, with her loving family by her side, in the early evening of Sunday, November 24th, 2019. Born in Formby (near Liverpool), England, Marjorie (Marj) was the second child of Gladys and James Pickett. She was predeceased by her parents; brother, Arthur; niece Hilary; son-in-law Rick; and her husband, William (Bill) McCue. She leaves behind her children Tracy (Mark), Graham (Roel), Gary (Stacey) and Kerry (formerly known as Lynn); grandchildren Jenn (Bill), Jazeen (Jim), Alixandra, Ryan (Theresa), Michael, Joshua (Cailen), Christopher and Mark; great-grandchildren Brooklyn, Travis, Scarlett, Sienna, and (very recently), Ivern. She also leaves behind her daughter-in-law Lisa (Ted); sister-in-law Joan and brother-in-law George (Gail). Marj never stopped. After marrying and having children, she immigrated to Canada (twice), sailing back and forth on the Empress of England. She lived in Toronto and then Paris, Ontario; then moved to Nassau, Bahamas; then moved back to Galt (now Cambridge), Ontario; then moved back to Formby, England; then back to Cambridge (where she remarried and lived much of her life) and then finally back to Toronto. Marj loved her family and friends – and this beautiful world – and she shared this love with us. Her family and friends meant the world to her. And she was always happiest outdoors. She loved animals, particularly horses. She rode horses through the fields, and along the beaches of Formby, and won hundreds of ribbons and trophies – as a show rider – in her childhood and teens. She also loved dogs and they were with her throughout her life. She loved walking. She walked along Formby beach, in the English Lake District, up Mount Snowden in Wales, along the west coast of Scotland and the Bruce Trail near Tobermory in Canada, along the shores of Canada’s east and west coasts, down and up the Grand Canyon, through the rainforests of Ecuador, and many other places. She cycled her whole life, cycling around England and Wales as a teenager, along the shores of Georgian Bay for many years, and participating in the Cambridge Tour de Grande in her seventies. Marj loved the water: she swam, windsurfed, sailed and snorkelled in Canada’s lakes and oceans, the Caribbean and South Pacific, and many other places. She loved driving – sometimes too fast – and was the first woman bus driver in Cambridge. She played tennis (both playing, and volunteering, for many years at the Soper Park Tennis Club in Cambridge), played squash, and cross-country skied. She greatly enjoyed hosting family and friends for dinner, especially during summers at Miller Lake. She loved travelling and visited many beautiful places around the world. And she rarely sat down – but always sat down to have a glass of wine or beer (or scotch, sometimes ruined with ginger ale) before dinner. Walking in the woods, or along a river or beach, was something Marj did regularly her whole life. She continued walking until her last week with us, saying to one of her sons, just days before passing away, “C’mon. Let’s go for a walk”. (They didn’t go far – but it was a walk). Marj was generous with her time and money. She donated regularly to numerous charities. She also volunteered for many years, most recently with the Cambridge Friendly Visiting Program, spending time with seniors facing social isolation. She was, as many people have told her children over the years “a very good person”. She will be greatly missed, but fondly remembered, by her family, friends and others she met along the way. Funeral arrangements are private. A Celebration of Life will be held in the spring/summer of the coming year in Cambridge, Ontario. In lieu of flowers, the family would appreciate donations to any of the following charities: Parkinson Canada, Canadian Cancer Society, World Wildlife Fund, or Doctors Without Borders.

Marjorie passed away peacefully in Toronto at the age of 81, with her loving family by her side, in the early evening of Sunday, November 24th, 2019. Born in Formby (near Liverpool), England, Marjorie (Marj) was the second child of Gladys and... View Obituary & Service Information

The family of Marjorie Gladys McCue created this Life Tributes page to make it easy to share your memories.

Marjorie passed away peacefully in Toronto at the age of 81,...

Send flowers to the McCue family.