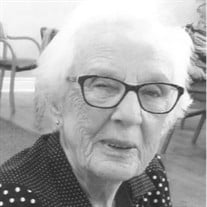 Mary Jenkins (Riley) passed peacefully on January 21, 2021. She was born Feb 19, 1933 in the home of her parents Chester and Marion Riley (Ross) in Dundas, PEI. Mary was predeceased by her husband Chester Harvey Jenkins from Mount Albion, PEI (2013), infant children James and Janice (1962), her brother Thomas (1995) , her brother John (2017) and sisters in law Audrey Riley (Robertson, 2020), Barbara Riley (Rice, 2016), Ruth MacEachern (2014),and brothers in law Wendell Jenkins (1998) and LLoyd Jenkins (2019). She is survived by her brother William and her sisters in law Rena Riley (Currie) and Myrna Jenkins and brother in law Lawson MacEachern. Mary was born and raised in Dundas, PEI but moved as a young married woman to Toronto, Ontario. She and Chet (Chester) were a fixture and trusted part of their community near St Clair and O’Connor in East York. Several years after the death of Chet, she moved to the St Clair O’Connor Community centre where she lived happily for about 8 years until moving into Fountainview nursing home when her health required it. Until her passing, she was a loved member of Westview Presbyterian Church, just down the road from their house. In her work life, she spent many years at Angus Fire Armour in their book keeping department. She and Chet loved their animals. They had dogs, like FIFI and Gizmo and after Chet’s passing, she had Cutie, her cat. In lieu of children, Aunt Mary had nieces and nephews that she loved and doted upon. There are many stories of sleep overs and great conversations to be had with her. She was everything someone would want as an aunt. Or, GREAT aunt. She will be greatly missed by all. Donations can be made to the Alzheimer’s society or the Toronto Cat Rescue  .

Mary Jenkins (Riley) passed peacefully on January 21, 2021. She was born Feb 19, 1933 in the home of her parents Chester and Marion Riley (Ross) in Dundas, PEI. Mary was predeceased by her husband Chester Harvey Jenkins from Mount Albion, PEI... View Obituary & Service Information

The family of Mary Jenkins created this Life Tributes page to make it easy to share your memories.

Send flowers to the Jenkins family.