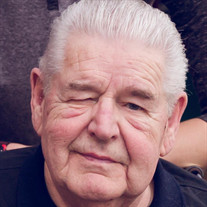 (February 2, 1942 – April 22, 2019) It is with sadness that the family of Matthew Kernohan Millar announce his passing on April 22, 2019. Matt will be lovingly remembered by his wife Jill, his children Stephen (Jennifer), Chris (Cassie), and Kathryn (Adrian), and his grandchildren Liam, Maeve, Declan, Emma, Ocean, Jillian, Leyton and Isla, his brother Ken (Marianne), his sister Debbie (Charles), and his many nieces, nephews and friends. Matt is predeceased by his parents Harry and Georgina, his brother Ray, and his beloved dog Katie. Matt was born in Ballymena, Northern Ireland and served as a pilot in the Royal Air Force in United Arab Emirates, Germany, Kuwait,and in different bases throughout England and the world. Prior to his retirement from the RAF, Matt became a display pilot performing at air shows throughout England and then emigrated with his wife and children to Canada. Matt continued his career in aviation working for Ranger Helicopters in Sault Ste Marie and then transferred to Transport Canada where he was the Regional Superintendent, Helicopters. In retirement, Matt enjoyed taking his dog Katie to agility training, spending time with his grandchildren and cheering them on at their hockey games. The family wish to thank Cory Spencer and Ashleigh Staples of Saint Elizabeth Nursesand Laurie Fisher of CHLINs for their compassion and support in the community, as well as Dr. Norman Kalyniuk, Dr. Allan Hess, Dr. Alan Lossing, and the ICD clinic for their many years of care. Also Dr. Tse, Dr. Lebner, and all the nurses of the 6th floor and palliative care at SRHC. Respecting Matt’s wishes, there will be no funeral or celebration, and a cremation has taken place. Memorial donations in memory of Matt may be made to Southlake Regional Health Centre Foundation.

The family of Matthew Millar created this Life Tributes page to make it easy to share your memories.

Send flowers to the Millar family.