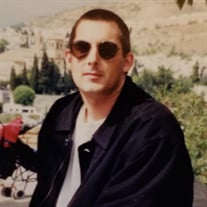 It is with profound sadness that we have said goodbye to our cherished brother, uncle, and friend. Michael died on Friday, October 8, 2021 at the age of 56. Michael was a kind, compassionate, intelligent, witty, talented instigator with a warmth that drew people in, making him loved by all who crossed his path. His caring and empathy for those less fortunate was evident in the relationships he formed. He listened to people, learned from and with others and showed sincerity in all areas of his life without criticism or judgment. Michael lived with integrity, courage, and wicked humour. He also gave the fiercest hugs! Those who knew him, understood his smirk could speak volumes, leading to various forms of mischief whether good or bad. He was a card shark, a trait passed down from his Williams roots as well as an impressive debater on all things, especially politics, religion, and history. Although Mike had his own struggles, he always had time for others whether he knew them well or not. Michael loved art and the arts, acquiring an eclectic collection and created his own pieces even when he was sick. His artistic nature, inherited from our mother, coupled with a vast knowledge on any subject made him a force to reckon with. He showed determination remaining upbeat and positive until the end. He gathered strength and hope from his family and friends, whom he loved dearly. He will be deeply missed, always remembered, and loved by his siblings: Neil (Deborah), Janet (Peter), Valerie (Joel), and Katherine; his nieces and nephews: Rhiannon (Sam), Gordon, Louise, and Roy as well as his beloved "girls" (which he affectionately called them) and numerous friends. Michael is predeceased by his mother, Enid Maize and father, Richard Williams. Michael's family would like to thank Transition House for embracing him wholeheartedly giving consistent support and friendship. Building lasting bonds with people was an integral part of Michael's personality. We are grateful for Drs. Bobrowski and Cassola who helped, influenced, and guided him. Michael received exceptional care from the staff at Princess Margaret Cancer Centre and we recognize their contributions too. We would also like to thank the compassionate staff at Kensington Hospice for providing superior care to our special brother these last few weeks. A celebration of Michael's remarkable legacy will be scheduled at a later date when restrictions allow. Online condolences may be provided at https://www.aftercare.org/. Donations can be made to Transition House Toronto (http://www.thousetoronto.org/), the Canadian Cancer Society (https://cancer.ca/en/) or Art Heart Toronto (https://www.artheart.ca/). Until we meet again comrade!

It is with profound sadness that we have said goodbye to our cherished brother, uncle, and friend. Michael died on Friday, October 8, 2021 at the age of 56. Michael was a kind, compassionate, intelligent, witty, talented instigator with a warmth... View Obituary & Service Information

The family of Michael Robert Williams created this Life Tributes page to make it easy to share your memories.

It is with profound sadness that we have said goodbye to our...

Send flowers to the Williams family.