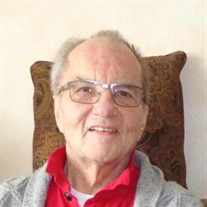 It is with heavy hearts that we announce the passing of Milton on April 17, 2020 at age 80. He lived his married life in Whitby until being hospitalized in April 2018 then was a resident at Orchard Villa long-term care in Pickering from January 2019 until his death. Beloved husband of Elaine (Medd) for over 52 years, father of sons Gene (wife Sandy) and Mark, grandfather of Nolan (deceased), Travis, and Kendall. Brother to Arlene Coates (Leonard), Carl (dec.) (Ellen), and Charles (Cheryl), and brother-in-law to Harold Medd (dec.), Lawrence Medd (Grace, dec.), and Betty Louise Medd (Phillip). Milton was born in the Orono area on July 16, 1939, and music was a mainstay in his whole life, from singing around the piano at home to singing in the Orono and the Wilfred and Cannington church choirs and the Bowmanville and Oshawa Choral Societies. After marriage Milton sang with St. Mark's United Church choir and The County Town Singers, and was a beloved member of The Oshawa Barbershoppers Chorus (The Oshawa Horseless Carriagemen) and various quartets, as well as The Tri-City Gospel Chorus and a retired men's chorus in Markham called the SUBURBANaires, which he directed for many years. Thirty-five years of teaching started at the schoolhouse in Hayden, then in Kedron (Principal also), in Whitby at Colborne Street and King Street Public Schools, and finally at Meadowcrest P.S. in Brooklin, where Milton taught for 19 years until his retirement in 1994. At school he only wanted the best for his students, academically and socially, and is fondly remembered by many of them. A big sports enthusiast, Milton played baseball in various leagues as a young man, acted as manager for a hockey team, then coached his sons' baseball teams. For many years he watched his kids and grandkids playing sports from the bleachers, and we were all grateful that his health was good enough for him to attend his grandkids’ hockey games in February. Milton was very social and loved talking to people, always interested in their activities. Many remember him as a kind and warm-hearted man. In his retired years it was sports on TV, music, crossword puzzles, and reading the newspaper front to back that took up his time, as long as good health allowed. Even though he had dealt with health issues for many years, ultimately it was the sudden symptoms from COVID-19 to which he unfortunately succumbed. Milton will be lovingly remembered by his family, friends, colleagues and former students. A Celebration of Life will be held at a later date. Donations in Milton's memory can be made to Sick Kid's Hospital, Toronto (https://www.sickkidsfoundation.com/donate), or a charity of your choice. Donations graciously appreciated in lieu of flowers.

It is with heavy hearts that we announce the passing of Milton on April 17, 2020 at age 80. He lived his married life in Whitby until being hospitalized in April 2018 then was a resident at Orchard Villa long-term care in Pickering from January... View Obituary & Service Information

The family of Milton Wesley Rainey created this Life Tributes page to make it easy to share your memories.

It is with heavy hearts that we announce the passing of Milton...