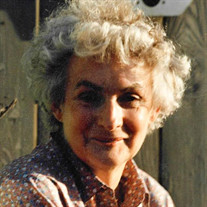 Norma Jenny Hewick (née Judge) May 15, 1925 - March 9, 2022 - mercifully and peacefully, in her sleep, exhausted from a four-year battle with Alzheimer’s, passed away two-month’s shy of her 97th birthday. Until she was 92 she had lived on her own with a dog and cat as companions in a beautiful stone house along the Elora Gorge. Her husband William (Bill), had died 27 years earlier, in 1990. In 2017 she was hospitalized in Fergus, and subsequently spent a year at St. Joseph’s in Guelph and four years at Highview Residence in Kitchener. She received excellent care at both facilities, but never lost her desire to go home. Born and raised in Weston, Ontario, at 57 Raymore Drive, she was the second in a family of six children. Her sisters Marion, Doreen, Celia, Thelma, and brother Wayne all predeceased her. Her father Clifford Judge, fought for Canada in WWI, his family from Ireland having settled in Caledon East in 1833; her mother Grace Judge (née Warner) was of German ancestry who came to Canada in 1860. She lived through the Depression as a child, and WWII as a young adult, coming of age in the 50s, 60s and 70s. She met her husband Bill while he was in RCAF training in WWII and she was a secretary at de Havilland Aircraft. They married on September 2, 1948, and had three children. For 25 years she was first and foremost a wife and homemaker, but in the early 70s, with only a Grade 8 education, she enrolled at Sheridan College in Brampton for training as a medical transcriptionist. In 1987 she retired from a 17-year career in the Health Records Services Department at Peel Memorial Hospital in Brampton. She made many friends there with her warm smile, sense of humour and her willingness to accept, befriend and help others. Her peripatetic life was centred on her home and family. Following her husband’s executive career with Ford, General Motors and Chrysler, they went from Weston to Brantford, North York, Preston, Kirkland Lake, Barrie, Brampton, Red Deer, Alberta; back to Brampton, Fergus in 1987; and finally, on her own to Elora in 1991. She created a warm and elegant home wherever she lived. She had very refined taste and a love of beautiful things. She dressed with style and was always careful about her appearance. She was an avid reader right up to the end, and loved her chocolates. Diminutive, shy and self-effacing, she was also a strong, independent, resourceful and resilient woman. “A tough old bird,” as she liked to say, with a remarkable ability to land on her feet and make the best of where she was and what she had. She had the “gift to be simple.” She is survived by her children Bill Hewick (Jr.), Darlene Moon and Kimberly Ahrens; her grandchildren Tammy, Page, Jennie, Amy and Zachary; and great-grandchildren Emily, Joel, Sarah, Madison and Sam. She has gone home at last to join her beloved husband Bill. Mine eyes wax heavy and the day grows old, The dew falls thick, my blood grows cold. Draw, draw the closéd curtains: and make room: My dear, my dearest dust; I come, I come. There will be a celebration of remembrance for Norma, aka an Irish wake, at 294 Berkeley Street, Toronto, between twelve and three p.m. on Sunday, May 15th. RSVP if possible. (416-461-2263)

The family of Norma Hewick created this Life Tributes page to make it easy to share your memories.