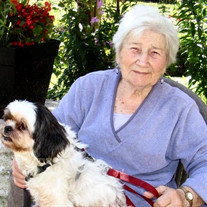 In Loving Memory of Olga Yvonne Trone July 7th, 1921 – January 10th, 2022 It is with great sadness we announce the peaceful passing of Olga Yvonne Trone, (mother, grandmother and great-grandmother) on Monday January 10th, 2022 at Chester Village, Long Term Care, Toronto, Ontario. Olga was 100 years young. Born Olga Yvonne Zamchira, July 7th, 1921 in Potochyshcha, Ukraine as the 4th oldest of 9 siblings, including three brothers Stephen, Tony and Sidney. Along with her sisters Stella, Anne, Mary, Sylvia, and Jean. Predeceased by her husband, Bernard, Olga is survived by her children, Deyanne Holmes (Gary), Arlene Moller (Jens) and Barbara Bryan (Steve), her grandchildren Christopher, Alan, Sven, Julia, Kyle, Aaron and Bentley, her four great-grandchildren, Masha, Tim, Claire, Abby and three siblings, Ann, Sylvia, Jeannie, along with numerous nieces and nephews. After a dramatic exodus from war, the Zamchira family immigrated to Canada in 1928 to be reunited with their father. Olga’s parents, Sophia & Mikhail Zamchira settled the family in what was then Fort William. As a large family needing help, Olga dutifully left school to work – her dreams on hold of becoming a teacher, Olga remained a life-long learner. Always busy, always crafting. She could read, write and speak fluently in English, Ukrainian, Polish and some Russian. She was barely 21, when she met Bernard Trone. As a dancing-duo, Bernie literally swept her off her feet. They married December 24th, 1943 in a double-wedding ceremony. After several moves, Olga and Bernie eventually settled in Toronto to raise their family. An avid- gardener, she was an active member of Eastview Senior’s Club well into her early 90s, Olga began a half-acre community school garden, she maintained into her late 80s. She will always be remembered as lively, a fun-loving soul, a true altruist, adventurist and healer -- her heart-felt generosity and kindness followed her everywhere. She will remain in our hearts as forever loving. Due to Covid restrictions, Olga will be cremated and a private family funeral will be held on January 23rd, 2022, 2:00 pm at Mount Pleasant Cemetery. An End of Life Celebration will follow at a later date. In lieu of flowers, please donate to: Sunnybrook's Garry Hurvitz Brain Sciences Centre, or A Living Tribute Canada to have a commemorative tree planted.

The family of Olga Yvonne Trone created this Life Tributes page to make it easy to share your memories.

Send flowers to the Trone family.