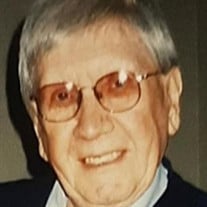 Pentti Henrik Jarvenpaa November 20, 1925 - October 12, 2020 It is with deep sorrow that we announce the passing of our loving father, Pentti Henrik Jarvenpaa at the age of 94, at Michael Garron Hospital in Toronto on October 12, 2020 on Thanksgiving Day. Every Thanksgiving from hereon will always be a symbolic day to give thanks that we were blessed to have him as our Father, Grandfather and Great Grandfather. Pentti will be eternally missed by his Daughters, Kristina (Dave), Mervi (John) and Michelle. Grandchildren, Daniel (Jessica), Luke (Jennifer), Corbin, Lauren, Nicole (Mitch), Daine, Nicholas, Josephyne and Stratton. Great Grandchildren, Henrik, Soren, Saul and Iver. Predeceased by his wife Ulpu (Vartija) of 31 years. He was lovingly known to his children and grandchildren as (a.k.a.) IRONMAN. He was our superhero! He was like none other. Gentle, kind, patient yet a brave and strong silent warrior. He was a man who led by example, his guiding influence and wisdom is what molded his children to be who we are today. And this we have passed on to our children and our children's children. His legacy lives on. It is a great loss for the Finnish community in Toronto, he had been an active member since 1970, served on many Committees, Boards and Government Agencies in Canada and Finland to help fundraise one million dollars for the construction of the Toronto Finnish Seniors Centre and acted as their first Administrator (1986-1990). He was an author and storyteller of the history and cultural life of the Finnish Community. He served in the Finnish Armed Forces during World war II and was decorated for his bravery. He was a member of the Toronto Finnish War Veterans Association and shared many memories of his experiences during World War II battling the Soviet Union. Pentti Studied Sociology, Social Work Methods, Administration and Psychopathology at the University of Toronto and graduated with a Postgraduate Degree, M.S.W. and also had a Bachelor of Arts Degree, majoring in Religion and Educational Philosophy and minoring in Science. Pentti retired from his career as a Social Worker with the Durham Region Children's Aid Society which involved many different roles in Law Enforcement, Expert Witnessing, Counselling with children, adolescents, parents and families, working closely with Police and Justice Systems. Of the numerous criminal cases Pentti investigated; one stood out for him. 1984 Christine Jessop murder and the wrongful conviction of an innocent man that Pentti worked so hard to convince of his innocence. Finally after 36 years, three days after Pentti’s passing the police found the killer. Sadly Pentti did not get this closure. Pentti's aim was always focused on serving his community and in recognition he was awarded Her Majesty Queen Elizabeth’s Silver Jubilee Medal. His unconditional caring for others and wisdom has impacted countless lives professionally and personally and to us and everyone who knew him, he is a legend. Due to covid-19 restrictions, the family has decided to hold a memorial service to honour our father on July 23, 2021 (tentatively covid allowing) at the Thornton Cemetery, Oshawa, Ontario. This date has been chosen as it marks 30 years from the passing of our mother (July 23, 1991). A special time to reunite our parents in the grave. Memorial donations may kindly be offered to the Michael Garron Hospital for their extremely professional and compassionate care.

The family of Pentti Henrik Jarvenpaa created this Life Tributes page to make it easy to share your memories.

Send flowers to the Jarvenpaa family.