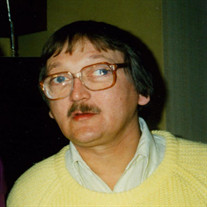 RICHARD ALLAN BALANYK “ RICHARD THE HANDYMAN NO JOB TOO SMALL “ Within the native belief systems - a spirit never dies. Most tribes believe that the souls of the dead pass into a spirit world and become a part of the spiritual forces that influence every aspect of their lives. On June 12, 2021, Rich left our Mother Earth peacefully and passed into the ‘spirit world’. Rich remained at Lakeside Long Term Care home until the end, as he had requested. He loved Lakeside and their wonderful caregivers with all his heart. Survived by his sister Diane and brother-in-law John, he is fondly remembered by several cousins, friends and his extended family and resident friends at Lakeside . Predeceased by his mother,Eleanor ( residential school survivor), and father Alex Balanyk, a miner, Richard was born in Sudbury ON July 13, 1946 and attended St. Aloysius Elementary School and then Sheridan Technical School. This is where he nurtured his love of drafting and design, and honed his dexterity skills. He was exceptionally gifted with his hands and became known for his capabilities in fine carpentry, indigenous beadwork, and the creation of many ‘dream catchers’, which he gifted to any stranger or passerby who showed an interest or appreciation for his work. It seems that those who have the ‘least’ of material things are often those who give the ‘most’. Physically, Richard was an avid walker and cyclist throughout most of his life. Sadly, all that was all taken away from him in 2004 when he suffered a serious stroke and became permanently paralyzed on his left side, and wheelchair bound for life. This tragic moment marked a sudden end to his independence and his ability to continue his work as a handyman, despite his unrelenting efforts to fix things with one hand. Yet, despite this life changing setback, Rich somehow managed to cope with his losses and transform his sadness and discouraging outlook into hope and optimism for every day that he lived. At Lakeside, he became the resident storyteller, trickster, trivia king, and companion to residents and staff alike. Inside Lakeside, he was known as the ‘candy man’; and outdoors, the ‘peanut man’ for the local squirrels. Being the determined soul that he was, Rich tested positive for Covid and, amazingly, fully recovered after several weeks in isolation. But as fate would have it, his other complex health issues began to take their toll on his weakened state. He suffered much pain in his final three years due to wounds that would no longer heal. This is the place in our story to express our gratitude to, and admiration for, a few significant friends and supporters: Dr. Heather Zimcik at Lakeside, you never gave up or lost hope that things might improve with Richard’s condition and prognosis; he loved his visits with you. Dr. Carol Ott, wound care specialist at Women’s College Hospital, who treated his wounds aggressively and successfully for some time ...you and your team made us smile every time we saw you. Roobika, Social Worker and endless communicator, kept us all in the “loop”; Cardinal House staff Barbara, Paulette , Melissa, Antoinette, Eric and Migmar; and all other staff who have also played a part in Richard’s care over the years; and personal friends of Richard who supported and always found time to care,David Perry, Sally Warburton, Jim Barreca and Lin Mitchell .You all formed an important part of his healing circle. Richard had a natural affection for most animals, especially our cats. However, he often spoke of his admiration and connection to the wolf family. We’ve since learned that the wolf is a symbol of guardianship,ritual,loyalty and spirit. The wolf often needs to trust their own instinct . Thus, they teach us to do the same, to trust our hearts and minds ... and to have control over our own lives . Richard took control in his final days . He used to say, “ a dream need not fade in the day”. So he’s left for us a footprint of his gentle spirit of kindness and determination . Our lives are better for loving you. So farewell Rich and...Miigwech. We will take his ashes to the Manitoulin Island where Mom was born. A private celebration of his life will take place a a later date.

RICHARD ALLAN BALANYK &#8220; RICHARD THE HANDYMAN NO JOB TOO SMALL &#8220; Within the native belief systems - a spirit never dies. Most tribes believe that the souls of the dead pass into a... View Obituary & Service Information

The family of Richard Allan Balanyk created this Life Tributes page to make it easy to share your memories.


“ RICHARD THE HANDYMAN NO JOB TOO SMALL...