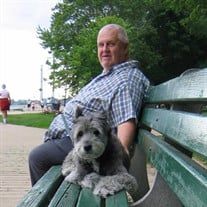 April 25, 1939 – March 2, 2021 Richard (Rick) Hallam passed away Tuesday evening at his home near the Beaches with his partner Michael at his side. To say Rick had an interesting, eventful life would be an understatement. He was a unique individual with a big heart who could make just about anything happen if he felt passionately enough about it, and he did so regularly. Just ask his partner who foolishly said he didn’t think they had a future together 31+ years ago. Rick was brother to Brian, Ken, Margaret, predeceased by Donald and David, as well as uncle to numerous nephews and nieces and their extended families. He was fortunate to have a wide circle of friends and neighbours and known affectionately on the street as the “Mayor of Ashdale”. On the canine front, Rick was blessed with three well-loved rescue dogs over the years namely Dooley, Daisy and Dudley who are probably smothering him in kisses right now. Rick had a positive impact on the world and those around him and used his many gifts to create beauty and positive change. “Good enough” was not in Rick’s vocabulary and it was always worth the extra effort to get something right whether it was renovating an entire home or fixing a button on a shirt. Rick had many passions and loved meeting new people, sharing stories, searching for the elusive good deal, camping on Georgian Bay, admiring or collecting art, enjoying good food, looking after his home, and living in his beloved city of Toronto. We will miss Rick but can remember him through his influence, contributions, and our individual memories. Good night SB, be at peace. You accomplished so much, lived such a full life, and will be missed by so many. Special thanks to all the health professionals at St. Michael’s Family Health Team & Hospital who cared for Rick, as well as the compassionate support provided by The Temmy Latner Centre for Palliative Care and the Local Health Integration Network (LHIN). Rick will be cremated with his ashes scattered in a favourite park. In lieu of flowers, those who wish to make a memorial donation in his name, may consider donations towards the Canadian Cancer Society or Doctors Without Borders.

April 25, 1939 &#8211; March 2, 2021 Richard (Rick) Hallam passed away Tuesday evening at his home near the Beaches with his partner Michael at his side. To say Rick had an interesting, eventful life would be an understatement. He was a unique... View Obituary & Service Information

The family of Richard James Hallam created this Life Tributes page to make it easy to share your memories.

Send flowers to the Hallam family.