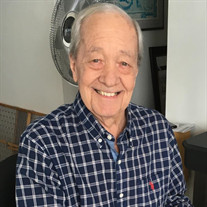 It is with great sadness that family and friends must say goodbye to Richard Irwin Hutchison, known to many as Rick or Hutch, who passed peacefully at Oakville Trafalgar Memorial Hospital, on Thursday, January 27, 2022, at the age of 82, after a long battle with Alzheimer’s, vascular dementia, and COPD. He leaves behind his loving partner, Judith Allen Shone, twin brother, David Hutchison, of Pickering, son, John McCartney of Paisley, and daughters Robin and Lindsay Hutchison, of Toronto, all in Ontario. His loss will leave a great hole in the hearts of those who loved him. Rick began his life in 1939, in the east end of Toronto, with his parents, Irwin John Hutchison and Aileen Hutchison (nee McArdle), nestled in the Beaches neighborhood, on the shore of Lake Ontario where his love for the water, swimming and boating was nurtured. As an adult, Rick showcased his moves as a ski instructor at Sunshine Village (Banff, AB), Mont-Tremblant (PQ) and Talisman (ON). Then he shook off the snow and got his feet wet in the display business as a promising young entrepreneur. He became a father to his son John (Mother: Joyce McCartney, nee Wright) in 1962, and his daughters Robin and Lindsay (Mother: Lynn Hutchison, nee Chalmers) in 1974 and 1976, respectively. By 1977, Rick had opened CES EXHIBITS in Toronto, and later moved it to Mississauga. Over time, as a designated Octanorm Service Partner, International, he travelled the world with clients and their displays until his retirement 31 years later. It was at CES where he met his current life partner Judy Shone. They spent Rick’s last 28 years attending trade shows, spending summer weekends power boating to clubs around Lake Ontario, visiting relatives and friends in both Canada and the US, and travelling to the Caribbean, always returning to love their little dog, Missy. Along the way, Judy noticed occasional signs of memory loss, that were finally confirmed as Alzheimer’s, the tragic disease that altered Rick’s life forever. Outside of his profession, Rick, a gregarious and social individual, brother, father, husband, partner, and friend, devoted hours to boating on Lake Ontario, with membership in National Yacht Club in Toronto, and later Port Credit Yacht Club and Oakville Power Boat Club. He was always the life of the party, an avid boater, forever entertainer, spoon player, professed pianist, banjo player, and fun dancer, oil paint dabbler, modest exhibitionist, Wheatsheaf supporter, imaginative chef, accomplished log cabin builder, and passionate YMCA volunteer. In later years, Rick’s talent and love for painting finally resurfaced while participating in the Alzheimer Society’s Creative Expression classes. A Celebration of Rick’s Life will be arranged in the coming spring or summer, when, hopefully, there will be a time when it is safe to do so. Leave a note on Rick’s Tribute Wall page on www.aftercare.org to receive updates. In lieu of flowers, the family requests donations be made to the Alzheimer Society of Halton (ON) office in memory of Rick Hutchison. Donations can be accepted at 4391 Harvester Road, Unit #8, Burlington, ON L6L 6L8, or through their website, www.alzda.ca, or phone 289-837-2310 for more information. Or plant and nurture a growing tree in the name of Rick Hutchison and learn about Canada’s 2 Billion Trees Commitment. Site visitors can leave memories, photos and condolences on the Tribute Wall of Richard Hutchison page at the site, www.aftercare.org. “And I’d choose you; in a hundred lifetimes, in a hundred worlds, in any version of reality, I’d find you and I’d choose you.” ~ Kiersten White, in The Chaos of Stars Richard Hutchison 1939-2022

It is with great sadness that family and friends must say goodbye to Richard Irwin Hutchison, known to many as Rick or Hutch, who passed peacefully at Oakville Trafalgar Memorial Hospital, on Thursday, January 27, 2022, at the age of 82, after... View Obituary & Service Information

The family of Richard Irwin Hutchison created this Life Tributes page to make it easy to share your memories.

It is with great sadness that family and friends must say goodbye...

Send flowers to the Hutchison family.