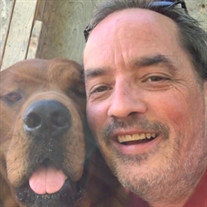 Robin “Rob” Allan Lean (1968-2021) Rob passed away peacefully on September 24, 2021 at Southlake Regional Health Centre in Newmarket with family by his side after a brief battle with illness. Heartfelt thanks to the many doctors, nurses and front-line health care workers who provided compassionate, expert care during his illness. Rob was born in Matheson, Ontario on March 28, 1968. His family later moved to Germany, North Bay and then to Hanover in 1982. Rob attended school in Hanover and, after graduating from JDSS, obtained his automotive technician license. He worked as a mechanic for a number of auto dealerships in Ayton, Owen Sound, Toronto and Newmarket, and retired early after being injured in a car accident in 2015. He always enjoyed working on cars and motorcycles and he particularly loved Lamborghinis, his Honda S2000 and dream car Acura NSX. Rob’s friends will remember his fun, easy-going nature and friendly, warm personality as well as his willingness to always help a friend in need. Prior to COVID-19, he enjoyed riding waverunners and 4-wheelers, travelling, going to concerts and spending time with friends and family. He also enjoyed animals (especially Tibetan Mastiffs) and is survived by his dog “Joan Jett.” Rob will be dearly missed and always remembered. He is survived by his spouse Nancy Lean (nee Caughy) and their daughter Robbyn, of Newmarket, his parents Rick and Lynne Lean of Hanover, his brother Mike (Lisa) of Walkerton, his brother Chris (Paula) of Keswick, his sister Tori of Grimsby and numerous nieces, nephews, cousins and in-laws. Cremation has taken place. A Celebration of Life will be held at a later date. Details will be provided when they are known. As expressions of sympathy, a donation in Rob’s name to the Southlake Regional Health Centre or the charity of your choice would be appreciated.

Robin &#8220;Rob&#8221; Allan Lean (1968-2021) Rob passed away peacefully on September 24, 2021 at Southlake Regional Health Centre in Newmarket with family by his side after a brief battle with illness. Heartfelt thanks to the many doctors,... View Obituary & Service Information

The family of Robin "Rob" Allan Lean created this Life Tributes page to make it easy to share your memories.

Send flowers to the Lean family.