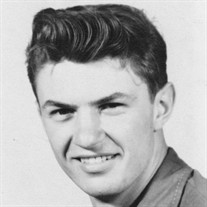 Ronald (Ron) Waldron, passed away peacefully at home on February 6, 2021, at the age of 84, with his wife and children by his side. Ron leaves behind his loving wife of 60 years, Jacqueline, and their 4 children - Jeffrey (Denise), Chris (Lisa), Joanne (Dave) and Lesley (Jean-Paul). Ron (“papa”) was adored by his 10 grandchildren – Ashleigh, Devon, Ryan, Mitchell, James, Parker, Emily, Alex, Brady and Mackenzie. Ron was born in Brantford and was the youngest of the 6 Waldron siblings. Predeceased by Bill, Marg, Jack and Jean, Ron leaves behind his sister, Mary Patis. Ron may be remembered by his Brantford friends for his love of football. He played halfback for his high school, BCI and later played for the Brantford Braves Intermediate Football Club. Ron earned the nickname of “Crazy Legs'' for his ability to break through the line and run the ball. Ron also spent a short time in the Ottawa Rough Riders and Hamilton Tiger Cats organizations. Ron worked for Bell Canada for 36 years and took an early retirement at age 55, however his true passion was the small fishing/family resort that he and Jacqueline purchased in 1970 and ran for 48 years, Forest Hill Lodge on Lovesick Lake near Peterborough. This is where Ron enjoyed his 4 o’clock beer every afternoon, with Jacqueline by his side, either on the front porch of the lodge or on the dock. Ron was a highly skilled handyman who loved making improvements to the lodge. Among many other projects, he built a large stone fireplace, rebuilt several cottages and constructed a home for he and Jacqueline to live in. While summers were spent at the lodge, winters were spent on the ski trails. Ron and Jacqueline introduced their children to cross country skiing and it became a favourite family activity. Many weekends were spent on the trails together and there were many memorable ski trips to Quebec and Vermont. Ron had a love of travel and he and Jacqueline explored most of Canada by car, in the early years. A memorable trip out West was taken with friends Mary and Bob Penny. As they aged, Ron and Jacqueline took trips to Florida and other warm locations in the winters with their siblings. During the last 20 years, Ron and Jacqueline explored Florida, Texas and Arizona in their RV. Ron was very concerned about climate change and was a strong supporter of the environment. He was also an animal lover, and always a favourite of the family dogs. Another of Ron’s interests was the stock market, which he monitored daily and traded in often. He was also known for having a love of Volvos and has passed this on to his sons and grandsons. Ron always took care of his family and has left many wonderful memories behind for all of them to cherish. He will be deeply missed by all those that loved him. For those who wish, donations may be made to the Nature Conservancy of Canada at natureconservancy.ca or Ronald McDonald House Canada at rmhccanada.ca A private family service will be held at a later date.

Ronald (Ron) Waldron, passed away peacefully at home on February 6, 2021, at the age of 84, with his wife and children by his side. Ron leaves behind his loving wife of 60 years, Jacqueline, and their 4 children - Jeffrey (Denise), Chris (Lisa),... View Obituary & Service Information

The family of Ronald Waldron created this Life Tributes page to make it easy to share your memories.

Ronald (Ron) Waldron, passed away peacefully at home on February...

Send flowers to the Waldron family.