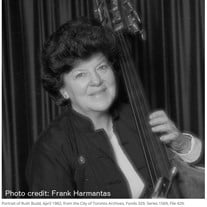 RUTH JUNE BUDD (June 20, 1924–June 30, 2021) The family of Ruth Budd, née Ross, is sad to announce her death, at age 97, at home in Toronto, after a brief illness. A retired Toronto Symphony Orchestra (TSO) musician, Ruth was born in Winnipeg, MB to parents Jack Ross and Olive (née Barrett), and was pre-deceased by her parents and her siblings, Pearl, Alan, and Rita. With oboist (ex)husband Philip Budd (deceased), Ruth had two children, son Kevin and daughter Gillian (deceased 2017). Ruth leaves to mourn son Kevin (and family); two grandsons, James (and family) and Kevin (and friend); one great-grandson; extended family; and an extraordinary number of friends of all ages. Ruth was Canada’s first professional female bassist. She was a much-loved member of the Toronto Symphony Orchestra (1947–1952 and 1964–1989) where she spent most of her career. She had also been a member of the symphony orchestras of Vancouver, Halifax, Hart House, the CBC, and a musician for the Canadian Opera Company, the National Ballet of Canada, and the Stratford Festival Orchestra. Interested in labour relations, Ruth was the founding chair of the Organization of Canadian Symphony Musicians. In retirement, she founded the Toronto Senior Strings and the Christie Gardens Chorale, and was a member of the Toronto Mandolin Orchestra (Shevchenko). Under the auspices of the TSO Education Program, she gave hundreds of presentations to school groups. She was affiliated with the Toronto Musicians’ Association and the Canadian Civil Liberties Association, and received the YWCA Toronto Women of Distinction Award (Arts). Ruth’s life was rich with friendships and with hands-on activities. In addition to being a classical musician, Ruth was a doer and a maker: she was a labour negotiator, a trailblazer for women in the arts, an accomplished potter, a folk musician, a film club member, and a children’s music educator. In her long and vibrant life, two stories stand out. When told by a high school music teacher that girls couldn’t play the double bass, she immediately took up the gauntlet, transferring her violin skills to the bass and, within a month, winning a prize. This youthful challenge was the catalyst for an exemplary career as a bassist—Canada’s first professional female bassist. Ruth was one of the “Symphony Six” TSO musicians who, suspected of being “Reds” during the Cold War, were barred for life from entry into the United States. This meant that the TSO of the era could not tour in the US with musicians who had been blacklisted, and so the six musicians were dropped from the Symphony—a controversial decision for which the TSO received much public criticism. When the Cold War abated, the TSO re-hired Ruth in 1964, where she continued as a beloved member of the orchestra until her retirement in 1989. The US entry restriction was finally revoked in the 1970s. The family thanks Christie Gardens Wellness Centre and the Temmy Latner Centre for Palliative Care team, who helped her through her short illness. A very special and heartfelt thanks to Ruth’s closest friends, whose friendship, help, and support are beyond measure. In lieu of flowers, friends may wish to honour her memory with a donation to a cause she valued, such as: Toronto Symphony Orchestra (tso.ca/tribute), Indspire Indigenous education (indspire.ca), or CAMH (camh.ca). Online condolences can be sent to aftercare.org. Ruth’s extraordinary life will be celebrated in person, when Covid restrictions allow.

The family of Ruth June Budd created this Life Tributes page to make it easy to share your memories.