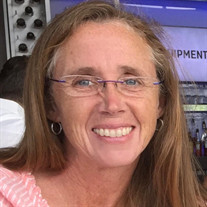 On Friday, June 19, we lost a mother, sister, aunt, cousin, niece and best friend. Sheila was born on June 6,1966 in Sydney, Nova Scotia to the late Peter and Lorraine (Gillis) Currie. Sheila and her late husband Alfred (Freddy) Baptiste Duprey were blessed to have had six beautiful children; Emma(23), Molly(21), Katie(20),Sam(17), Maggie(12), and Peggy(10). Sheila was extremely proud of them. Each were instilled with a strong sense of independence, confidence, and a love of family. They will draw on these strengths in the years to come. Sheila’s passing has been a devastating loss to her only sibling Roseann Currie (Greg MacPhee), Sydney, and her two children Sarah and Ryan. Rosie will miss her feisty, determined sister and their daily phone calls: with six children there was always an interesting story. She is also predeceased by her mother-in-law Marie Aitken, her brother-in-law James Hennessy, and numerous aunts and uncles. Left to mourn are her brothers-in-law Ray Duprey and Gordie Aitken, sisters-in-law Elaine Dalton and Cathy Hennessy, many aunts and uncles whom she adored, and several nieces and nephews. Sheila lived in Toronto, Ontario and worked as a full time teacher with the Catholic School Board. She would never hesitate to lend a helping hand to anyone at anytime: a strong character trait passed on from her beloved parents. Her front door was always open, an invitation was understood, and a sign was hung to welcome you to her porch. She had many friends and close cousins near and far, and their care and concern during her courageous battle with cancer was so very appreciated. One of Sheila’s strongest passions was her love for running. Her medals were hung proudly in her home. She completed numerous marathons and races: most recently in Jamaica in December 2019. The family would like to thank the many doctors and nurses of St. Joseph’s Health Centre, SE Health, and the Dorothy Ley Hospice who provided extraordinary care and compassion to Sheila during her illness. Cremation has taken place and condolences may be left at www.aftercare.org. A service will be held at a future date in the home of her heart, Cape Breton, Nova Scotia. Should friends or family desire, donations may be made to the Dorothy Ley Hospice, or to a trust fund set up through CIBC for Sheilas children. (Tr# 04522 Inst# 010 Acct# 4295218)

The family of Sheila Marie Duprey created this Life Tributes page to make it easy to share your memories.

Send flowers to the Duprey family.