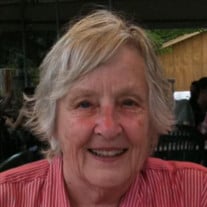 Sylvia Margaret Williams, born April 9, 1933 in Oshawa, Ontario, to Margaret Alice Conant Severn, (nee Myers) and Roy Fletcher Severn, (Sievenpiper). Sylvia passed away peacefully at Cawthra Gardens Home in her 88th year. Sylvia was predeceased by her husband, George (Bud) and her sister Julie (Beasy). She will be sadly missed by her brothers Paul and Owen Severn. Sylvia was the devoted wife of George Henry Williams, and loving mother of Jeffrey Paul, (Jaki), Russell George, (Sheri) and Karen Louise. Sylvia was the proud grandmother of Tyler, Margaret, Abigail and Emma. Sylvia grew up in Toronto and after finishing school, worked as a secretary for the Goodyear Tire Company in Long Branch. She even got to pose as a tire model one year. Sylvia had skills in both typing and shorthand, a code that she could produce so fast. For sure she was one of only a few that could actually read it. Her typing skills on a manual typewriter, (with carbon paper), were always very handy for school reports. Sylvia married George Williams in 1954, also from the Long Branch/Alderwood area and they settled in a small home that they built themselves in Long Branch. As her family came, first with Jeff, then Russell, they decided they needed more room and moved to Sherway in Cooksville where their daughter Karen was born. Sylvia and Bud enjoyed the rest of their lives in this home, (over 50 years), until finally Sylvia was moved into a care home in 2012, (Alzheimer’s). This was after many years of care by George in the family home. Sylvia was a beautiful, kind and gentle person, always smiling and friendly to everyone, a trait that stayed with her to the end. She spent a lot of time near and on the water. Sailing was a large part of life with George, (for better or worse). Sylvia always enjoyed the outdoors and loved spending summers at the family cottage, “SYJUPO”, named for Sylvia and her siblings. Spending the hot summer days swimming, boating, trips to Battersea, playing games and relaxing around the campfire. After her three children came, she took them to spend each summer at the cottage. The cottage was on Loughborough Lake and one reason that made for extended stays was the fact that before the super highways were built, it was a long 7 plus hour drive. Sylvia was a full time mother and made sure that her family had the little extras that were needed by working temporary jobs on and off through her life. As the family grew up they worked with Sylvia, (and Bud on weekends), to manage and run the Galvin Bay Trailer Park from May to Oct for many years. Sylvia was an avid flower gardener and always had full beautiful flower beds to brighten up the yard. Another passion was taking pictures and arranging them into albums, true keepsakes. Sylvia was a very good piano player and seemed to be able to play anything, whether she had music in front of her or not. The house would often be full of the piano music. As Sylvia grew older she and George loved nothing more than spending their spare time visiting and playing with their grand children. Sylvia Williams will be fondly remembered by her many friends and always be in the hearts of her family. If desired, donations may be made in lieu of flowers to the ALZHEIMER’s SOCIETY, Ontario.

The family of Sylvia Margaret Williams created this Life Tributes page to make it easy to share your memories.

Send flowers to the Williams family.