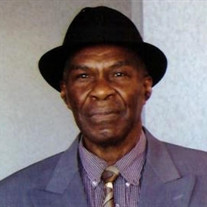 Theodore Maynard was born in Longdenville, Trinidad & Tobago on November 9th,1938 to his father Joseph and his mother Herhina Maynard. He was the last of 12 siblings: Austin, Ricardo, Beresford, Alay, Theo, Samuel, Olga, Goya, Came, Paulitta, and Angalitta. He eventually married his wife Jean Maynard January 27, 1961. On Monday, December 24th, 2018, he fell asleep in death and is survived by his dear wife Jean Maynard of 57 years of marriage. He leaves behind his 5 children: Rudolph, Randolph (deceased), Enid, Alexander, Philemon, and Wendy. Along with their 16 grandchildren: Clint, Sherica, Nathania, Kerrese, Stefan, Joseph, Raejean, Emily, Steven, Simone, Elizabeth, Kuerten, Apolline, Alexandria, Melanie, and Isaiah. In addition to 2 great grandkids: Noah and Jonah. Theodore “Teddy” Maynard was a loving husband, father and provider of his family. He worked as a telephone technician for over 33 years in Trinidad, and before retirement, his wife and himself were owners of a supermarket in Enterprise, Trinidad. Thereafter, they both migrated to Canada in 1989. Many would describe Theodore as a helpful, industrious individual, with a contagious laugh that could brighten up a room. He always considered himself a sportsman, but never played any sports…although, he did love bike riding! Playing checkers was his special pastime, and nobody was able to beat him, he was just that good! He enjoyed music and dance, as he was a singer in an Indian band in Trinidad and loved spending much time with his family. With his grandchildren, he took pleasure in joking with his wife and comparing each other's families. He adored his grandchildren just as much as he loved sweets and cereal and was surrounded by the majority of his family minutes before he passed in his home in Brampton, Ontario. As a publisher of the good news, he enjoyed going out in the ministry and speaking to others about his faith. He will be deeply missed and we hope to see him again soon. We eagerly look forward to the hope promised in Revelation 21:4 when all will have the opportunity to live in a world free from sickness and death. The Family wishes to extend sincere gratitude in appreciation for many expressions of sympathy, acts of kindness and consideration shown during Ted’s illness and bereavement. Memorial Service Held At: Saturday January 5th 2019 at 1:00 PM Kingdom Hall of Jehovah’s Witnesses 360 Conestoga Drive Brampton, ON L6Z 2S9 Reception At: Saturday January 5th 2019 at 2:00 PM Snelgrove Community Centre 11692 Hurontario St. Brampton, ON L7A 1K5

The family of Theodore Maynard created this Life Tributes page to make it easy to share your memories.

Send flowers to the Maynard family.