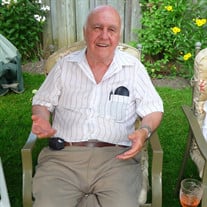 GEMAKAS, William (Bill) James – It is with great sadness we announce the passing of our Uncle Bill, on November 13 2017 at the age of 86. Surrounded by family, he went peacefully while in Scarborough General Hospital after a brief illness with pneumonia. Predeceased by his parents, George and Florence Mary (Marie nee Gibbons), brothers John, Jerry, Alec (late Alice), Peter (late Winnie), and Chris (late Evelyn), and sisters Mary (late Joe) and Helen (late Gord). He is survived by his older brother, George (late Ada). Never married, he adopted his sisters families as his own; Mary’s two boys, Victor and (late) Joey. And Helen’s family: Barbara (Lindo), Angela (Brian), Dawna, Cathy (Wayne), Janet, and John (Darlene). He was also Uncle to Diana (Mario), Marjorie (late Cliff), Dorothy, Gail (Harry) Betty (Norm) and more. He was also a special Great-Uncle to Charlene (Mike), Kyla, Dara, Amanda (Mark), (late) Ryan, Katie, Shay, Samantha, Jimmy, Christopher, Alexandra, Michael, Gordon, Stephen and more. He was a Great-Great Uncle to Ben, and more. Uncle Bill was a simpler man, who always said he was born in the wrong time. He proved this in the TV he watched. He loved classic movies on the AMC channel; he was a big fan of Jane Eyre and Wuthering Heights style movies. He enjoyed historical documentaries and shows like The Royals, and he was surprisingly a fan of Gilmour Girls. He loved his Toronto sports teams, the Blue Jays and the Maple Leafs. He would always call Vic, Joey, Angela or Brian to make sure they were watching the game. He loved his cell phone! He was very up-to-date on current events and trends. (He knew what a selfie was!) When he read the newspaper, he would cut out articles that would relate to someone in the family in case they might have use for it (or just to prove a point), underlining or highlighting lines he thought were important that we see. He loved coming to family functions, all the birthdays and every holiday. He was so much looking forward to Christmas this year. After he stopped driving he always had to make sure we wouldn’t forget to pick him up and bring him over to whoevers house was hosting. We could always count on him to fall asleep anywhere, leaving him vulnerable to have items like paper plates or napkins placed on him to see if he noticed. He never did. When going out in public with him it was never a question of IF he would say something inappropriate, it was WHEN. And when it happened, boy did our faces turn red, followed by a quick “Uncle Bill!! Shhh!” Because, as we all knew, he was deaf. So those remarks you should whisper quietly, became extremely loud words in which everyone in the building could hear. Wherever he went he left a big impression on people. He was very personable. He had such a presence that drew others to him. (In all honesty it was probably because he was yelling to hear himself talk that drew people over.) Everyone said they loved his humour and his unapologetic personality. And no matter who you were, relative or not, he was always called Uncle Bill. One of his favourite things to do in the summertime was to find a backyard and just sit in the warmth under a tree and fall asleep. He’d have his glass (or three) of wine (blush!!), a plate of snacks, and he was content. As per Uncle Bill’s wishes, we will not be holding a formal funeral service. We have decided to wait until March 2018 to celebrate Uncle Bill's life as he wanted the whole family to be together, saying he wants us “ to have a glass of blush or sparkling white wine, or a beer, enjoy some food, with some of those little sandwiches, and say all nice things about me!" A graveside ceremony will be held at Prospect Cemetery on St Clair Ave. W in Toronto prior to coming back to Angela and Brian's home in Scarborough. Details will be emailed in February 2018. Special thanks to his niece Angela, for always being there for him and looking after his every need over the last 6 years. Special thanks, also, to Dr. Fred Teixeira, his family physician for many years and for always listening to him; and to Nella, the Dr.'s receptionist for always doing her best to accommodate Uncle Bill's early morning appointment requests. He will be greatly missed by his friends from Jack Goodlad Senior building and Rockcliffe Nursing Home. As much as he drove us crazy sometimes, we will miss him equally as much. Rest in Peace and in Paradise Uncle Bill, your journey continues. May 26 1931 – November 13 2017

GEMAKAS, William (Bill) James &#8211; It is with great sadness we announce the passing of our Uncle Bill, on November 13 2017 at the age of 86. Surrounded by family, he went peacefully while in Scarborough General Hospital after a brief illness... View Obituary & Service Information

The family of Mr. William James Gemakas created this Life Tributes page to make it easy to share your memories.

GEMAKAS, William (Bill) James – It is with great sadness we announce...

Send flowers to the Gemakas family.